01 Mar Do you suddenly need a payed subscription for using (Oracle) Java?

Posted at 16:14h in Oracle, Security by Plumbus

IMPORTANT: information provided is purely informative and has no legal value

Update September 2nd 2019: inform your JAVA users they should not just install the latest update, which can easily be done by pressing “Install” or “Next” after the following window appears: 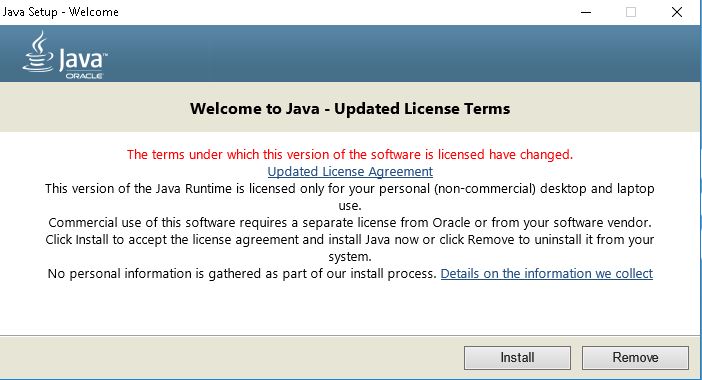 It shows the user a separate license is needed to keep on using this version. However, users will probably not read this and just continue upgrading. That shows how easy it is to get a compliance issue now.

Last few months, there was a lot to do about Java and the fact that future usage would only be allowed via subscription. But what is it all about? And do you really need to buy a subscription for Java?

A bit of history

From the beginning of Java, feature releases were driven by one or more significant features. In a lot of cases, those features also determined the release date. If the feature was not ready, the release would also be postponed.

Until a certain point in time, this way of working was acceptable. However, times were changing and so developers needed to be faster and more innovative. That’s why the Java community decided to switch from feature-driven releases to time-driven releases (somewhere around 2012). Initially, they planned to have a new feature release every 2 years. If there would be a feature which was not ready after 2 years, it would not be implemented and just be further developed for the next release. Theoretically, this was all fine, but also the releases were postponed due to important security issues etc… And again, postponed features were only implemented 2 years later, which was simply too late.

That’s why since Java 9, following time-based model is in place now:

This will keep Java an interesting language for companies, supporting the latest development innovations.

Should we pay to use Java starting from January 2019?

In January 2019, Oracle released the last free public available patch and update of Oracle Java 8: Java SE 8u202. Starting from this point, you’ll not receive any free publicly available patches and updates for Java 8 anymore. In addition: changes of the Java Release Cadence which will impact the deployment of Java binaries on your desktops and server environments. You can, however, still use Oracle Java 8 for free and without any further changes (within the definitions defined in the “Oracle Technology Network License Agreement for Oracle Java SE” and “Oracle Binary Code License Agreement for the Java SE Platform Products and JavaFX” agreements, so make sure Java usage is within the “General Purpose Computing” definition of Oracle if you want to avoid compliance issues). However, it’s not allowed to install any updates and/or hotfixes anymore so you’re Java environment will become insecure in the future, and the “Java SE commercial features” may not be used (we’ll talk about this again later).

Free usage for Oracle Java is not allowed for all versions: for the new versions of Java (11 and higher), production use of OracleJDK is not free anymore and will need to be licensed. Important notice: Oracle will continue to publish updates for Oracle Java 8 via java.com (or via auto-update) for personal users until December 2020 (definition of personal users can be found on https://www.oracle.com/technetwork/java/java-se-support-roadmap.html). In some cases, the Oracle Java SE software running on desktops will be updated automatically, depending on the settings. Just make sure this is not the case for all of your desktops (by checking the update settings and by informing your users (also see the update of September 2nd above))! Those updates may never be downloaded/installed by commercial users (a Java SE subscription is required in this case, and updates/hotfixes should be downloaded via My Oracle Support)!

Therefore Oracle announced a new subscription model for Oracle Java SE. This new subscription model will permit the use, updates & patches, support and use of the “Java SE commercial features” from Java SE 8 and other versions where relevant. “Java SE commercial features” include after-the-fact incident analysis (Java Flight Controller & Java Mission Control), greater and easier control in managing Java version compatibility and security updates for desktops (Advanced Management Console), monitoring features, etc… All features which are really an added value to ensure maximum uptime and security of your Java environment.

So, should you pay to use Java now?

However, don’t forget that without subscription you’ll not have the rights to any commercial features downloaded and you’ll not have access to Oracle Premier Support and any updates.

And last but not least: if you use any Oracle product that requires Java SE (and you have an active support contract for this Oracle product), you have a restricted use license for Oracle Java SE runtime with, and for the sole purpose of running that Oracle product. In this case, the best is to contact your Oracle Account manager or us to check your compliancy for the usage of Java SE.

What are your options for future usage of Oracle Java?

With all the changes described above, you as a customer can choose to do one of the following:

How do I check my version

To check which version you are running on your server and/or desktop, you can easily use the following command on Windows, macOS and Linux: java -version

More information on how to find your Java version in Windows or mac:  https://www.java.com/en/download/help/version_manual.xml.

It’s difficult to give any advice just on our website, as this should be discussed case by case.

However, as a best practice and for important production environments, the use of Oracle Java SE with the corresponding subscription could be a good idea, as it’ll provide support and important updates too (next to the 6-monthly upgrades for which you would need to migrate your entire java environment with the OpenJDK model). Good to know: starting from version Java SE 11, OracleJDK is free to use for test and development environments.

Apart from that and for each Java version: make sure your Java usage is within the “General Purpose Computing” definition of Oracle, just to make sure it is really free to use in your case. If your Java usage is not within this definition, you’ll have a compliance issue if no subscription is in place. Read more in the “Oracle Technology Network License Agreement for Oracle Java SE” and “Oracle Binary Code License Agreement for the Java SE Platform Products and JavaFX” agreements.

Also have a look at following webinar (20 minutes): Focusing on Java from a Business Standpoint